I’ve decided to combine my posts for the last two parties in the Assembly, because the story is pretty straightforward. Here’s UKIP’s plot of vote share in the two elections. 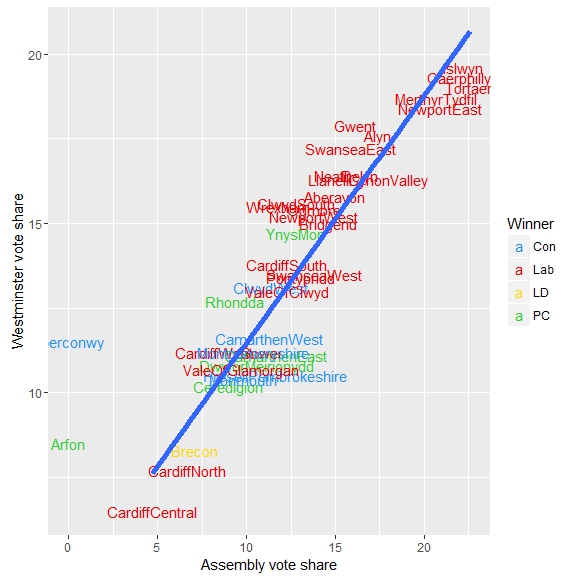 With the exception of Arfon and Aberconwy, where they didn’t stand, UKIP’s performance in the Assembly can be almost perfectly predicted by their Westminster performance. The correlation between the two is .94, excluding Arfon and Aberconwy and .88 including them. The line of best fit on the graph excludes these two constituencies by the way. I’ve not included the plot for change in UKIP vote as UKIP didn’t contest any Assembly constituencies last time and only contested a few Welsh Westminster constituencies back in 2010, so the plot isn’t good for much except playing spot the difference with the above plot.

As for the Lib Dems… 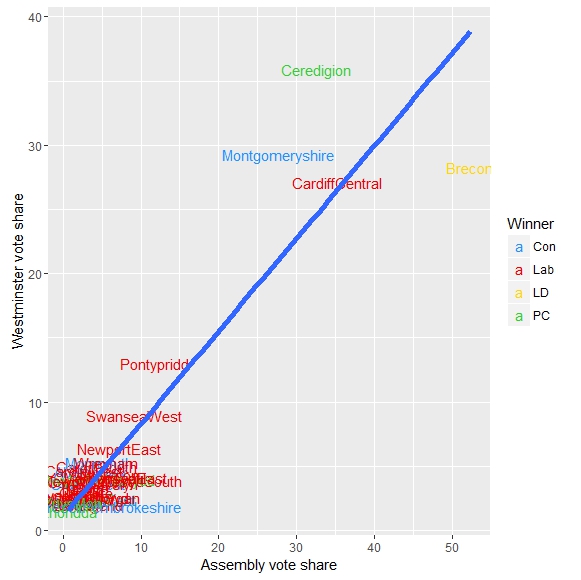 It feels like every plot I make of Lib Dem performance just hammers home how concentrated their vote is in these four constituencies! The correlation is .93, but this is not a reliable number given how weirdly distributed their votes are. Mark Williams, the MP for Ceredigion and new leader of the party in Wales, said that he hoped to improve Lib Dem prospects outside of these four seats. I suppose it’s hard for them to do much worse elsewhere, but that seems like a very long term strategy. 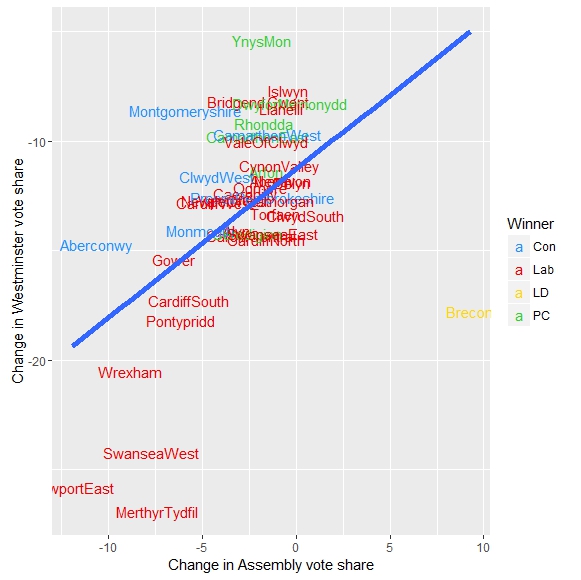 As for change in Lib Dem vote, again this tells us what we might have expected – Kirsty Williams did extremely well in Brecon. The presence of Montgomeryshire above the line, suggesting poorer performance here in the Assembly is perhaps an ominous sign for their recovery.

Interestingly, UKIP actually did slightly better in the Westminster election – 13.8% compared to  12.8% – emphasising that is the list system which gives UKIP its returns in the Assembly, not greater support. The Lib Dems did slightly better in 2016 than 2015 – 7.5% as opposed to 6.5% in vote share and a loss of only 2.9 percentage points rather than the whopping 13.3 in 2015. This could reflect some softening in public anger at the Lib Dems for going into coalition in 2015, the distinctiveness of the Welsh Lib Dems from the national party, or (most likely in my opinion) the low base the Lib Dems were starting from in the Assembly.