I’m resisting the urge for this post to be my opinions on today’s dramatic events in the Senedd –  I’m sure plenty of people who know much more than me on the topic will cover this over the next few days so I’m going to try to approach the broader issue with a quantitative flavour.

Today’s events have demonstrated how hemmed in Labour find themselves by rival parties. In many respects this might be helpful – Labour are certainly keen to promote a perception that Plaid are ganging up with UKIP and the Tories and have generally been very successful at dividing and conquering their opponents. In other respects, however, it might turn out to be more of a challenge. 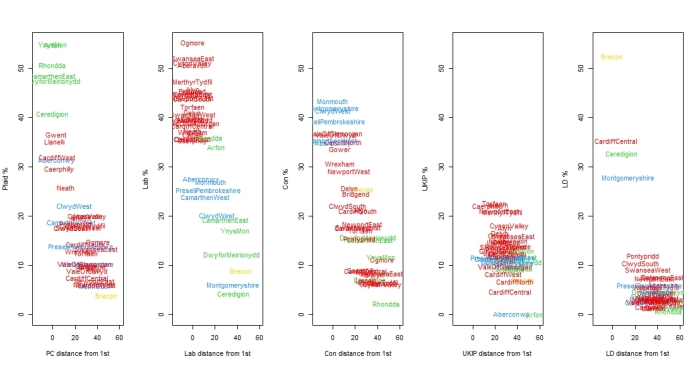 The plot above shows the percentage vote for each party of the Y-axis and how many percentage points that party was behind whoever won the seat on the X-axis. So if the party won the seat, it’s at the far left of the panel (and the constituency name is in the party’s colour).

The plot shows that the top target seat for every non-Labour party represented here is currently held by Labour – Gwent and Llanelli for Plaid, ‘The Vale of [insert vale here]’ seats for the Tories, Torfaen and Caerphilly for UKIP, and Cardiff Central for the Lib Dems.

Labour on the other hand seem to have an odd gap in their vote share between the seats they won and all the others, except the Rhondda and Arfon. Maybe this is evidence that Carwyn Jones is a lucky general after all, but it does suggest limited scope for Labour to go on the attack in very many seats. Even in the two that they look like they have a good chance it’s not clear how their chances would be. What happens next election in the Rhondda is frankly anyone’s guess – it will depend a great deal on how Leanne Wood performs. Labour’s share of the vote in Arfon (the constituency I live in) feels like it may be a less solid foundation than it looks – UKIP didn’t run a candidate here and Plaid are certainly well dug in here with an absolute majority.

Things can famously change quickly in politics but it certainly looks like Labour are set up to be on the defensive for the time being. They have limited target seats, and a number of tricky battles on multiple ideological and geographic fronts. It will be difficult to compose a message to pick up votes  from all of these parties at once. Labour’s days of governing alonemay be numbered. There was clearly an emotional response to the First Minister vote this afternoon but Labour would be well advised not to burn too many bridges. Coalition may well be forced upon them before long.